To kick off the second phase of planning, the project team conducted a detailed analysis of the current site, focusing on transit, sunlight, the urban context, and trees. 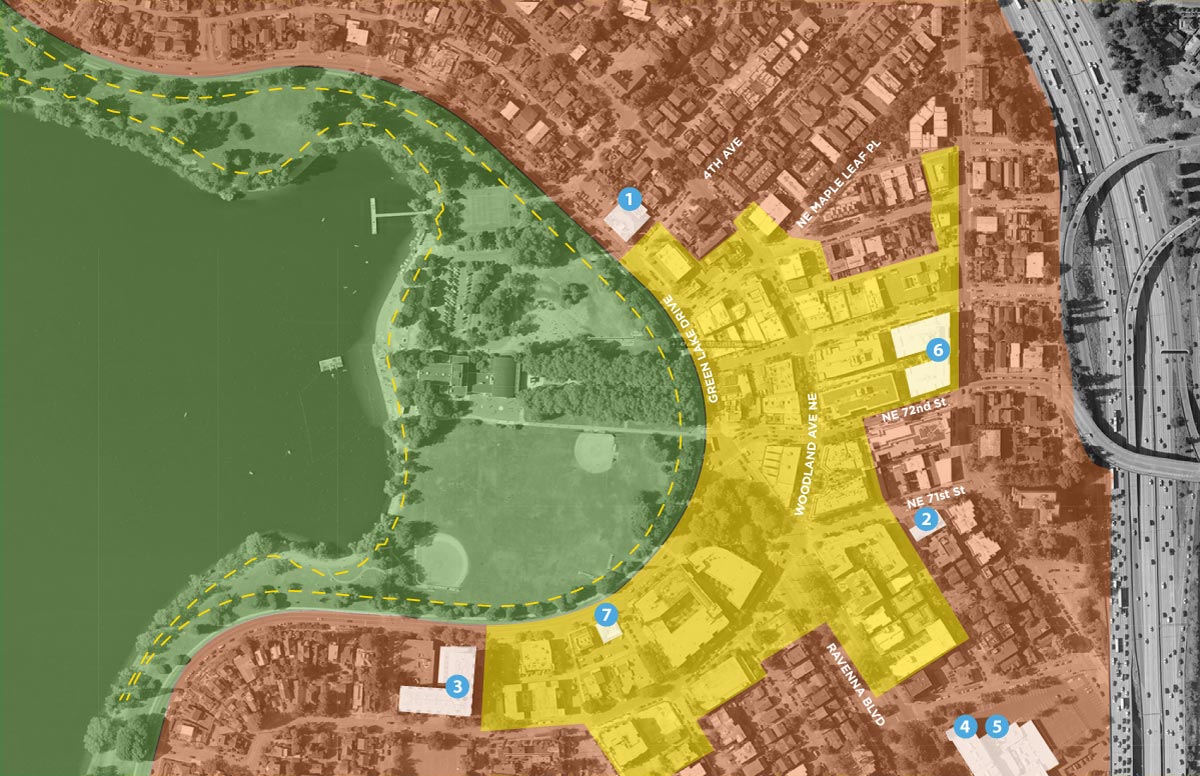 Building Setback from Road and Shoreline

The neighborhood adjacent to the community center includes a mix of civic buildings, restaurants, shops, and residential buildings. The neighborhood public library represents a strong commercial center that provides several support services for the park. 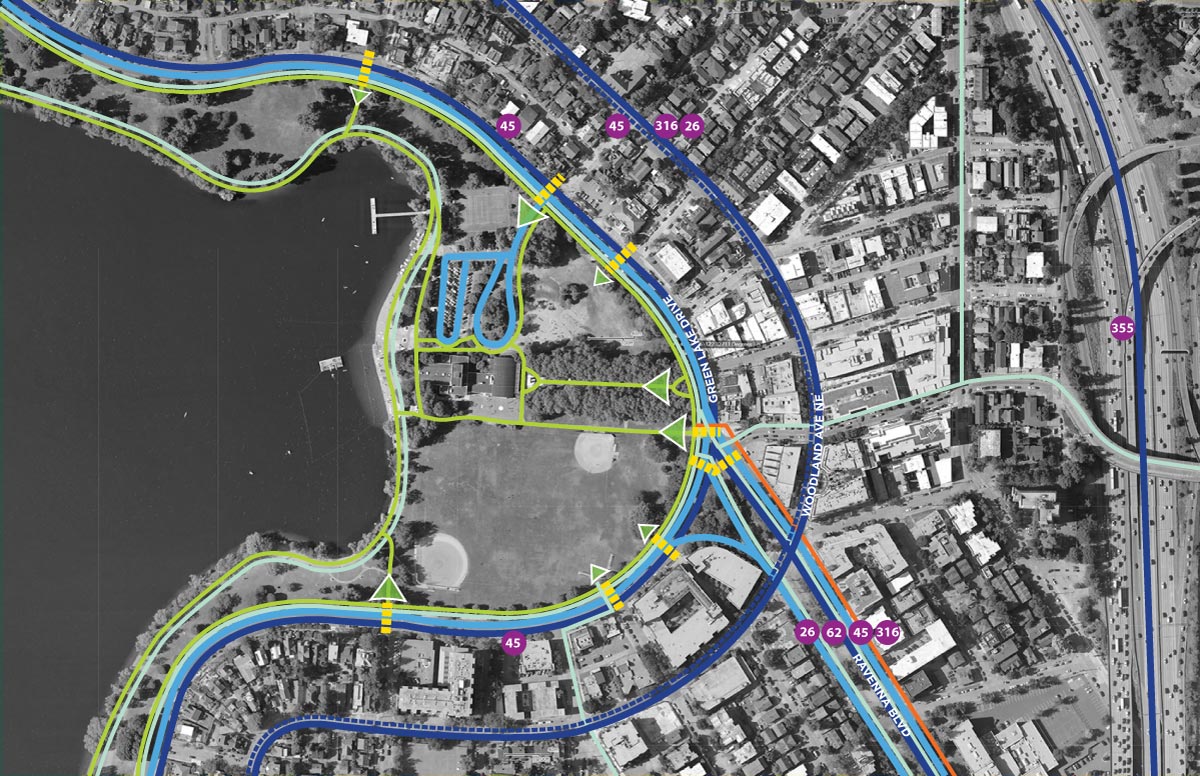 Multiple transit routes serve the site, providing quick and convenient service from Downtown and neighborhoods north of here. Vehicular access is available from Green Lake Way, and the site is a short drive from Interstate 5 or Highway 99. Several bike lanes converge around the lake, making it easy to arrive by bike. Multiple crosswalks provide pedestrian access into the adjacent neighborhood.

The future Roosevelt Light Rail Station on the east side of Interstate 5 will provide another way to get to the site that involves just a 10- to 15-minute walk. The site is also close to several schools that use the pool for swim practice. 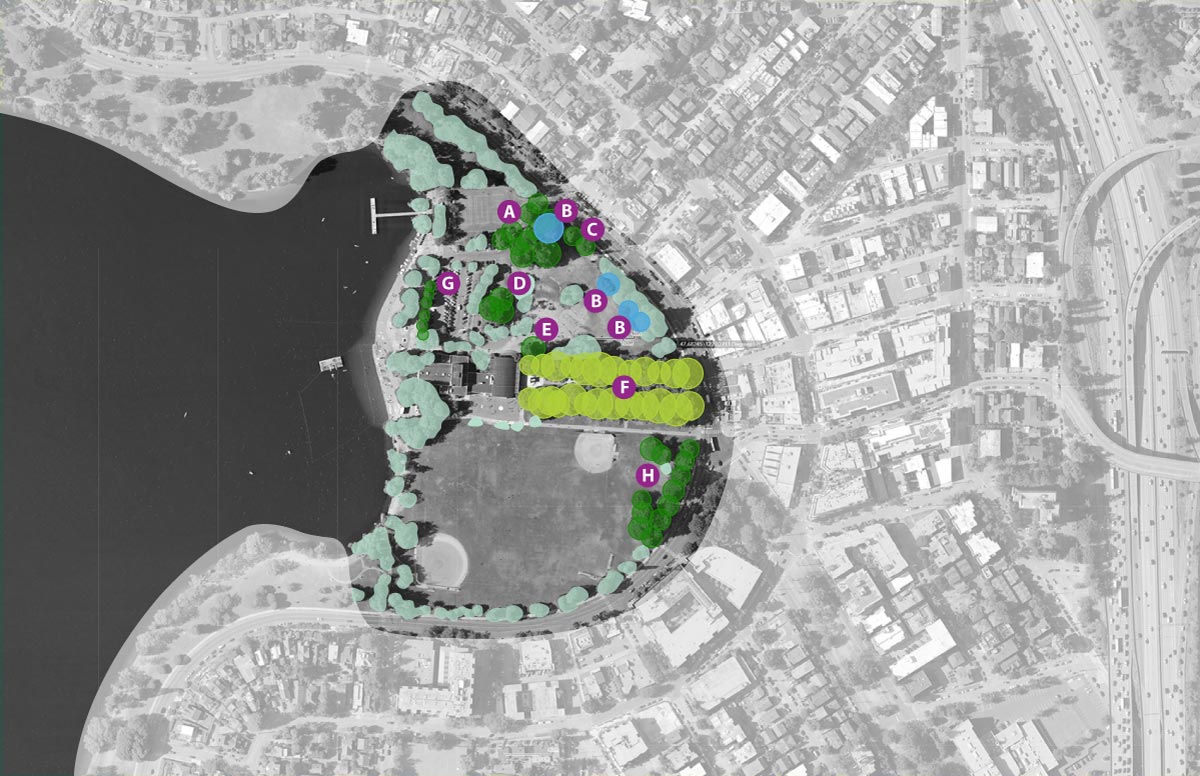 This slide begins to identify the tree canopy so we can assess how the building can fit into the existing landscape. Mature trees grace many of the lawn and open spaces around the lake that are key components of the original planning for the site. Although the trees were not necessarily implemented as originally detailed in the 1908 plans, they are important to consider as we look to construct a new building. We will prioritize saving mature trees as we look at building location options. There are also planting areas that have not changed much since they were originally planted in the 1920s. 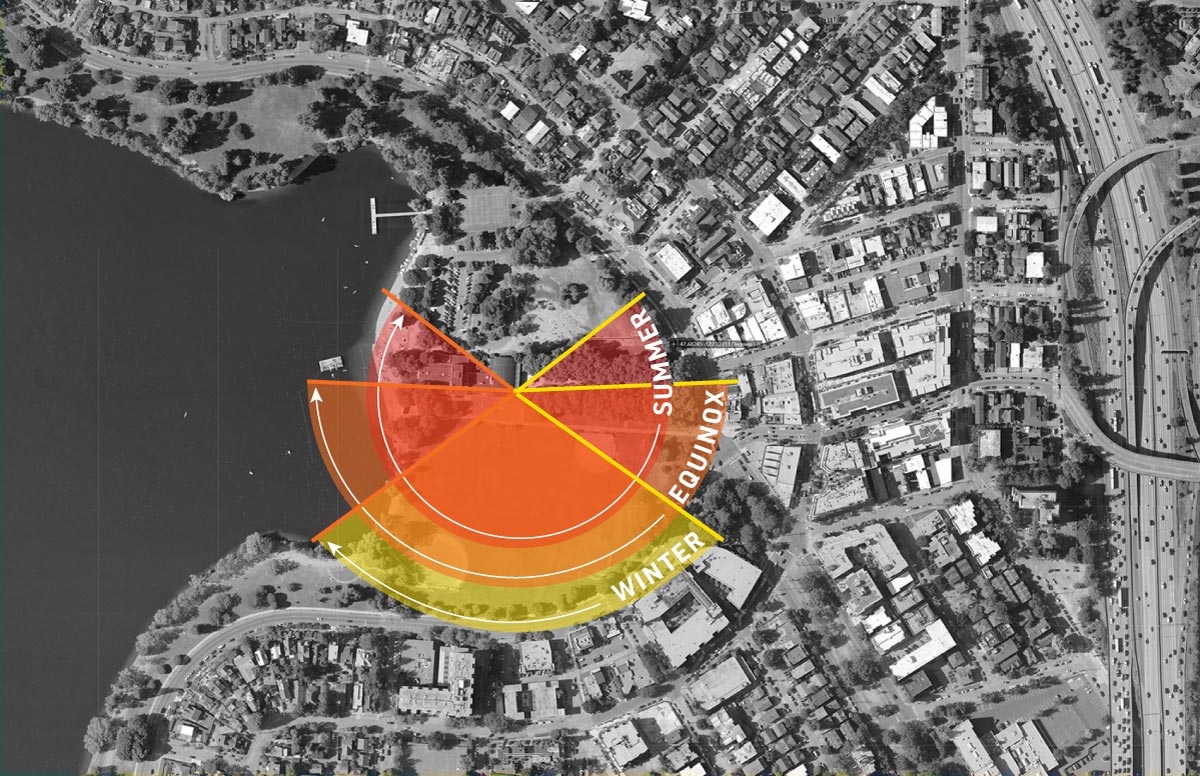 Solar orientation is a key component to the sustainability of the new building, as the extent of sunlight available throughout the year is important to energy usage considerations. 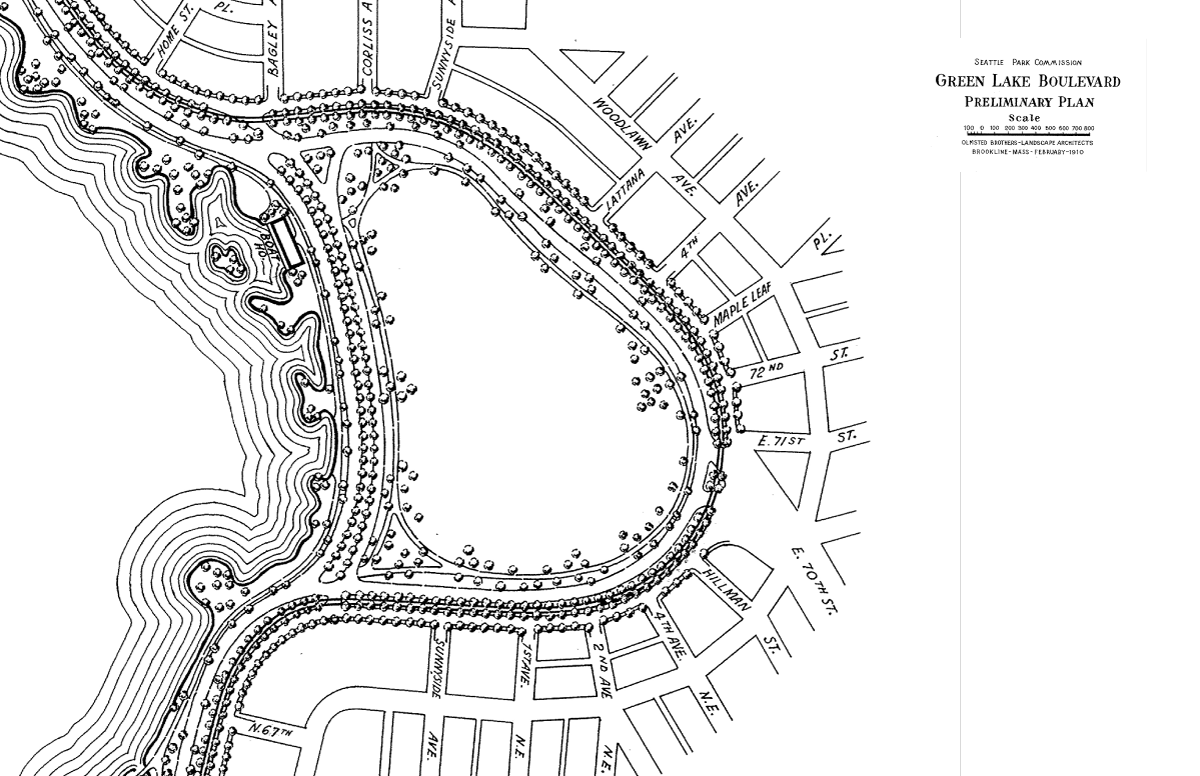 The general plan from 1908 (revised in 1910), titled “Green Lake Boulevard,” depicts a pleasure drive along the water’s edge that is planted with trees and shrubs intermixed with swaths of lawn. In this plan, you can see the original recommendation for park development at the present-day site of the community center. The large open space was created by lowering the lake seven feet, and the shallow area was filled to provide the open fields, walking paths, landscaping, and buildings that we see today. Much of this is intact, although it has been altered as the site has developed over time. 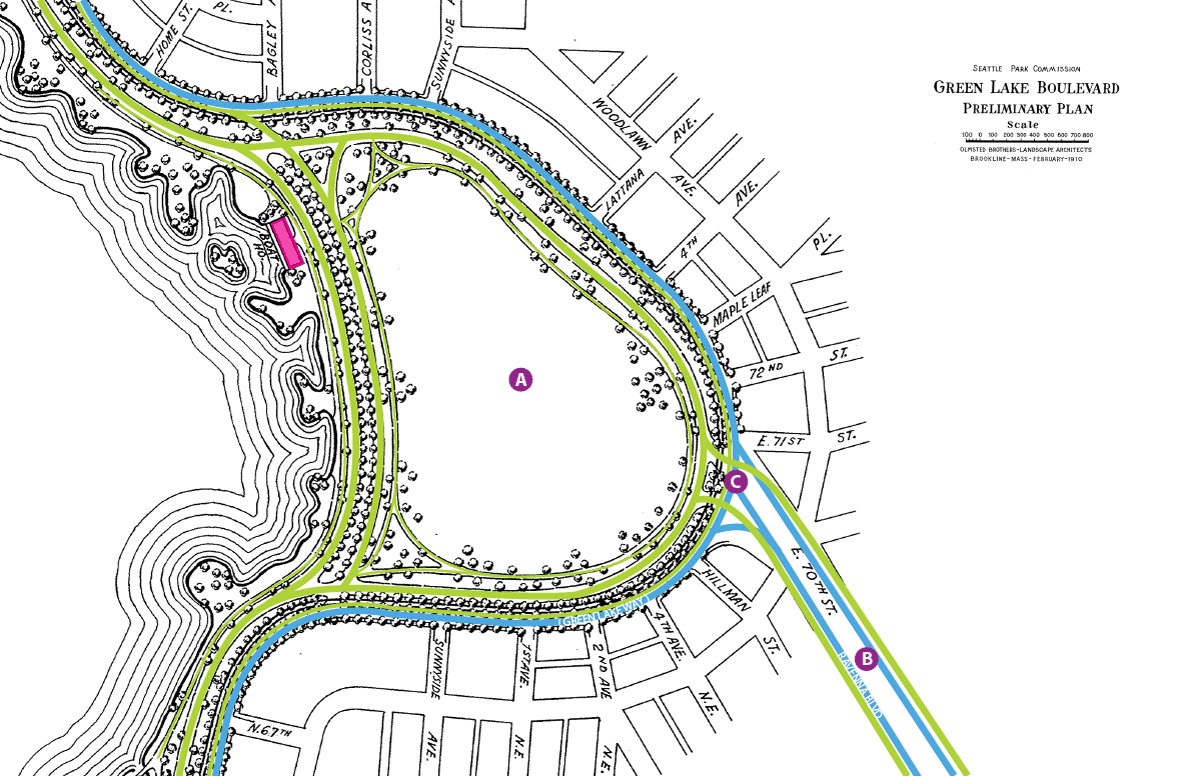 As we examine the general plan, we see that there are several elements used to organize the site. One of the main purposes of the park was to provide an escape from the urban built environment. Around the outer perimeter of the site, the parkway provided a place for vehicles to navigate around the lake. An important connection is made at the east edge of the site, where the parkway continues east along Ravenna Boulevard.

Finally, the development of a boat house is indicated along the lake’s shoreline. The building was intended to be screened by a series of islands and landscaping. (The islands adjacent to the shoreline were never constructed.) 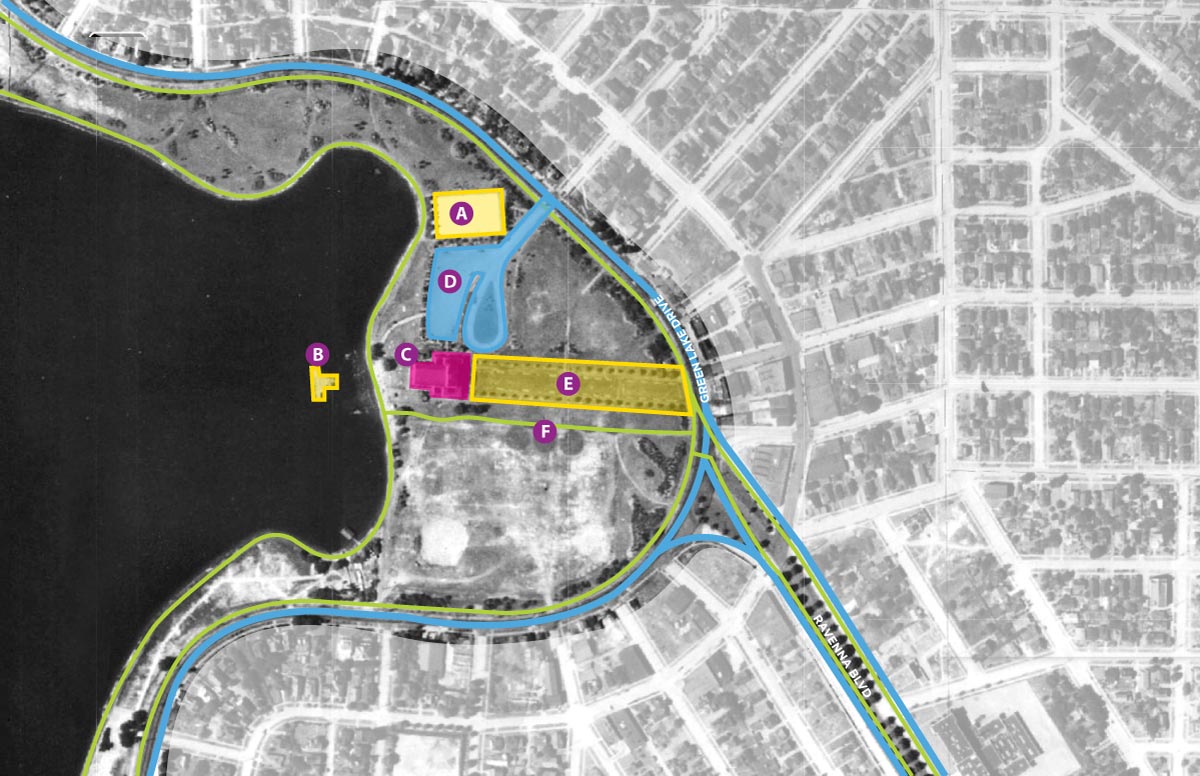 *Additional site features were not part of the original design of Green Lake Park or its original construction, but were added later.

Early park development consisted of dirt pathways and a single tennis court. In the 1920s, the dirt pathways and tennis courts were expanded, and the floating dock was constructed. In 1929, the community center building was constructed at the lakeshore. The front door of the building faced Green Lake Drive North and was lined with a formal planting of sycamore trees. Following the original plans for the site, new landscape plantings were also installed. Several of these planting beds and original sycamore trees are still intact today. The parking lot was later developed in connection with the building and is in its original configuration. 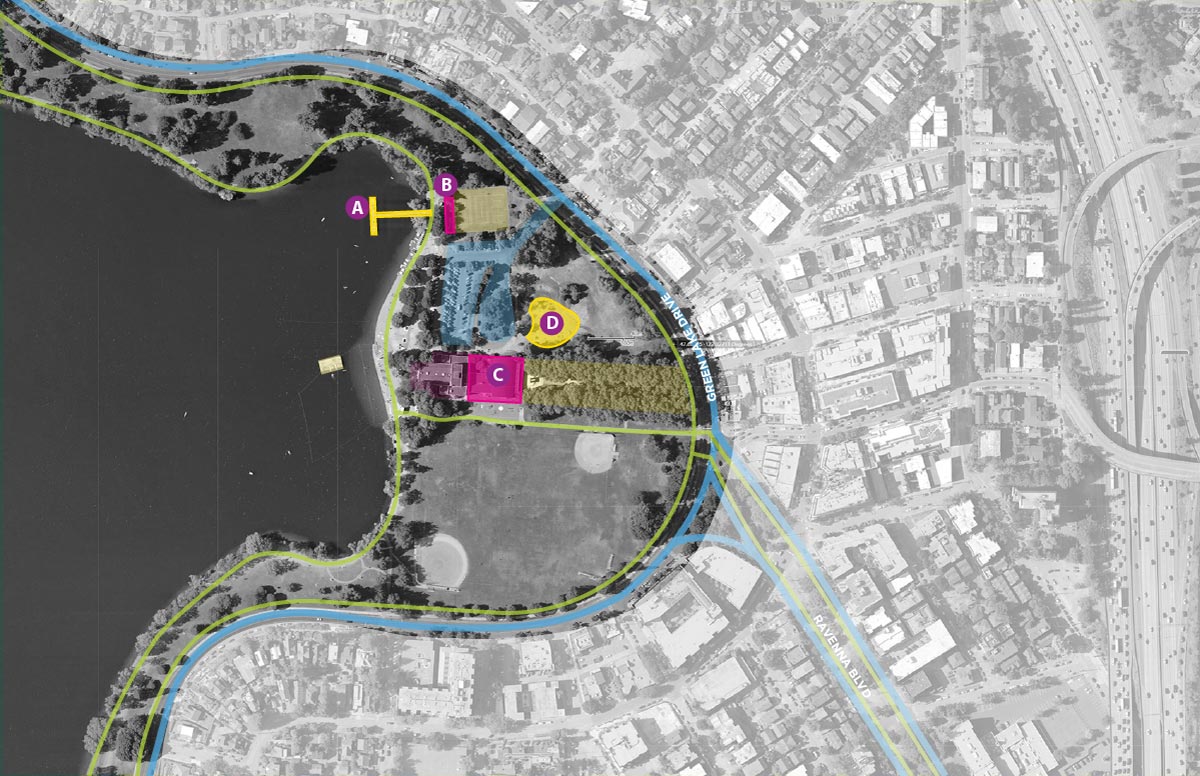 Planning for Seattle’s park system started in 1903 when John Olmsted recommended a series of park boulevards that would link to larger open spaces forming an interconnected network of parks that was intended to ring the city. Development of Green Lake Park began in 1908 and lasted several decades.

The Olmsted Brothers used ten unique design principles, four of which will continue to help inform our planning for the new community center and pool:

Go To Next Page Go To Previous Page